Back in the days when I was sharpening my ears and preparing myself for eventual excessive alcohol consumption, I spent much of my so-called free time in a small bar in the town I tried to grow up in listening to Sweatband forge their own place in South African music history. John Mair was our Guitar God. Wendy Oldfield was the sexiest Rock Chick you could imagine. Sweatband rocked.
Sadly though, after releasing one album, the band split. The boy didn’t quite make it (that big). I saw John in a bar in Johannesburg a number of years later. What happened? “We had to make a living…” He still played the guitar like there was no tomorrow and coaxed applause with his playing-the-guitar-behind-his-head trick. I’m not sure the crowd knew what they were experiencing. I knew it was awesome.

Wendy grew up. Sporadically releasing albums and winning awards. Her most recent offering being a collection of children’s songs. She’s still hot. Unfortunately, John passed away in 2002.

Most of the interesting music in the Eighties was happening in Johannesburg. Making an effort to watch bands play live when (or if) they came down South was not really much of a priority for me at that point. There were other things to deal with. Like growing up. I was lucky enough to see éVoid in our Town Hall. I was even luckier to see Cherry Faced Lurchers at Jamesons in Johannesburg later. Wow.
I would have liked to see bands like Via Afrika, Dog Detachment or Ella Mental. But I was growing up.

There is one band that I’d taken a special interest in and really would like to have seen. They were rockers. They had an element of danger. Even their name should have warned you. The Asylum Kids. Soon they too would break up and disperse. If my memory serves me correctly, Dino Archon moved to Los Angeles – forming a band called DV8. This was the first time I became aware of the concept of South African musicians actually being able to ‘go overseas’ and be musicians. The realities of Trevor Rabin and Anton Fig came to my consciousness later. Trevor Rabin joined a re-imagined Yes. Anton Fig played drums on Cyndi Lauper’s first album. Dollar Brand and Hugh Masekela being in exile was part of an entirely different reality.

Part of The Asylum Kids initially stayed and formed Tribe After Tribe – achieving some success with a cover of a Bob Dylan song and their album ‘Power’ in 1985. The production on the album is a bit dull, but in time this would be remedied. Before that could happen however, Tribe After Tribe also seemed to disappear off the face of the planet. I thought.

A couple of years went by. Then I stumbled upon another Tribe After Tribe album. They where alive and well. Albeit mainly as a collective of sorts banded around the curly red-head guy. Robbi Robb. Well now… Soon I would realize that Robbi had been the creative force behind The Asylum Kids. I had managed to lay my hands on two albums, ‘Tribe After Tribe’ (released in 1991 on Megaforce – just before the label’s demise) and ‘Pearls Before Swine’ (released in 1997 on Bulletproof – another label with a limited future). ‘Love Under Will’ (from 1993) and ‘Enchanted Entrance’ (from 2002) have somehow managed to escape my collection. For now.

The three albums after ‘Power’ took some of the undertones from that album and finally managed to get a sound that many grunge bands probably still only dream of. There was a better understanding of how to translate the band’s feel into a recording. It took the all-embracing power of guitar-driven rock from as far into the earth as you can dig with your bare hands to a little higher than McClears Beacon. It feels like the desolation of the desert being made a happy place for those who race through the Karoo on their trips between Johannesburg and Cape Town. To stop and breathe.

For more familiar musical references: think of melting Jane’s Addiction’s jangling, Led Zeppelin’s meandering, Jimi Hendrix’s groove, Pearl Jam when they’re playing something from ‘Ten’, an angry Neil Young and some atmospheric moments of Slayer together and having someone pour it gently into your ears.

Then go and hunt for ‘M.O.A.B. Stories From Deuteronomy’ (released in 2008, and yes – also on a small label…). This is the latest studio album by Tribe After Tribe. A live album has been released since. It is brilliant, but not the place to start. It is also pricy.

‘M.O.A.B’ showcases a slightly less edgy sound - as did ‘Enchanted Entrance’. It embodies a ‘concept album’ tone with interludes and readings from Deuteronomy, but there’s nothing lost here.
(It should also be the easiest of the albums to lay your hands on.)

Don’t let it pass you by. 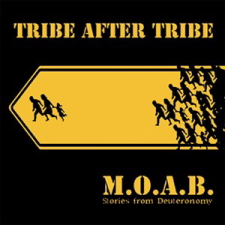