It was early in the Eighties, and Thin Lizzy had edged slightly beyond the dark-ish romanticism which characterised much of Phil Lynott’s lyrics. They’d opted for a harder sound – veering decisively toward Heavy Metal. It would have been interesting to see how this would have unfolded, but due to the various outside interests of various band members, Thin Lizzy was falling apart and finally dissolved by the end of 1983. As a significant creative force in the band, Lynott’s unfortunate death in January 1986 properly laid that option to rest.

The Thunder and Lightning album contains some really excellent songs. Unfortunately not much attention seems to have been paid to the running order of the tracks, so the album lacks cohesiveness and direction. I’ve tried to improve this a little, but it wasn’t as successful as my rearranging of the running order of Metallica’s Black Album. Fortunately, once the music starts, it knocks you right to the back of the room – giving you sufficient space to deal with this oversight. Just be sure to turn up the volume – and hold on!

The title track leaves no doubt regarding the direction the band was heading. Musically powerful and heavy everything, with a storyline in the same streetwise ilk as ‘The Boys Are Back In Town’ from 1975’s Jailbreak album. Saturday nights, fighting and really just being tough testosterone-ridden dudes. Nothing too poetic. A musically simpler attack follows with ‘This Is The One’ - a brilliant relentless clockwork grind that sadly has to end. Keyboardist Darren Wharton, who had featured on the two preceding albums, co-wrote ‘The Sun Goes Down’ which slows the pace down considerably, but without slowing down the intent. I remember this song getting some airplay around the time of the album’s release.

Thin Lizzy’s characteristic romantic story-telling undercurrent remains present, and although a shift had started with ‘Angel of Death’ and ‘Hollywood (Down on Your Luck)’ from 1981’s Renegade, the overriding heavy tone of this album had only been as in-your-face on occasion in previous studio albums – most noticeably with the title track of Bad Reputation from 1977, ‘Chinatown’ from 1980 - and on the live album Live And Dangerous from 1978. The drumming of Brian Downey features more prominently in all these recordings. On this album Downey also co-wrote the title track and ‘Some Day She’s Going To Hit Back’. The heaviness may have been an attempt to both deal with the then-fading Punk scene with whom the band’s rebellious nature had found some favour, and to stay current in a growing pool of rising Heavy Metal artists, some of whom would have been influenced by Thin Lizzy’s tough, streetwise vibe.

‘The Holy War’ has some commentary on religion. It starts off with a slappy bass line that could misguide you into thinking we’ve entered the Funk Age. Lynott’s ominous vocal and those lead-guitar breaks from new guitarist John Sykes will soon make it clear that we haven’t. It remains hard to place this in a box, especially because this album is already a partial re-invention of Thin Lizzy’s unconventional hard rock style. Sykes also co-wrote ‘Cold Sweat’ - a menacing Motörhead-like rocker.

If you’re more familiar with songs like ‘Still in Love With You’ [Nightlife 1974] or even their version of ‘Whisky In The Jar’, this heavy onslaught may seem out of character, but it actually suits Thin Lizzy well. Considering ‘Out in the Fields’ - a song recorded two years later by Lynott and previously intermittent Thin Lizzy guitarist Gary Moore, and the single’s B-Side ‘Military Man’, it is a credible progression for the band. Again, I wonder how things would have been if Lynott hadn’t died…

The rest of the album continues in a more typical Thin Lizzy mode which, in comparison to the heavier stuff, almost seems whimsical. This is still Thin Lizzy, though, and the songs are great. For some reason, it always makes me want to listen to their 1971 self-titled debut album, which, almost absurdly, I haven’t managed to get into my collection. Yet…. 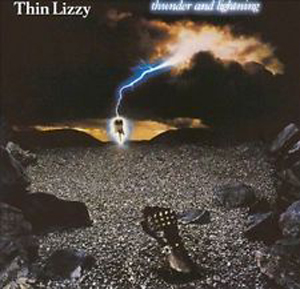 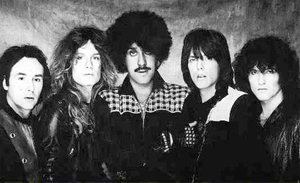